The Röhsska Museum’s collection includes more than 500 chairs. In the open storage repository, visitors can peruse a selection that spans more than 300 years. The chair is an inherently interesting design object that is generally expected to be comfortable, practical and aesthetically pleasing. 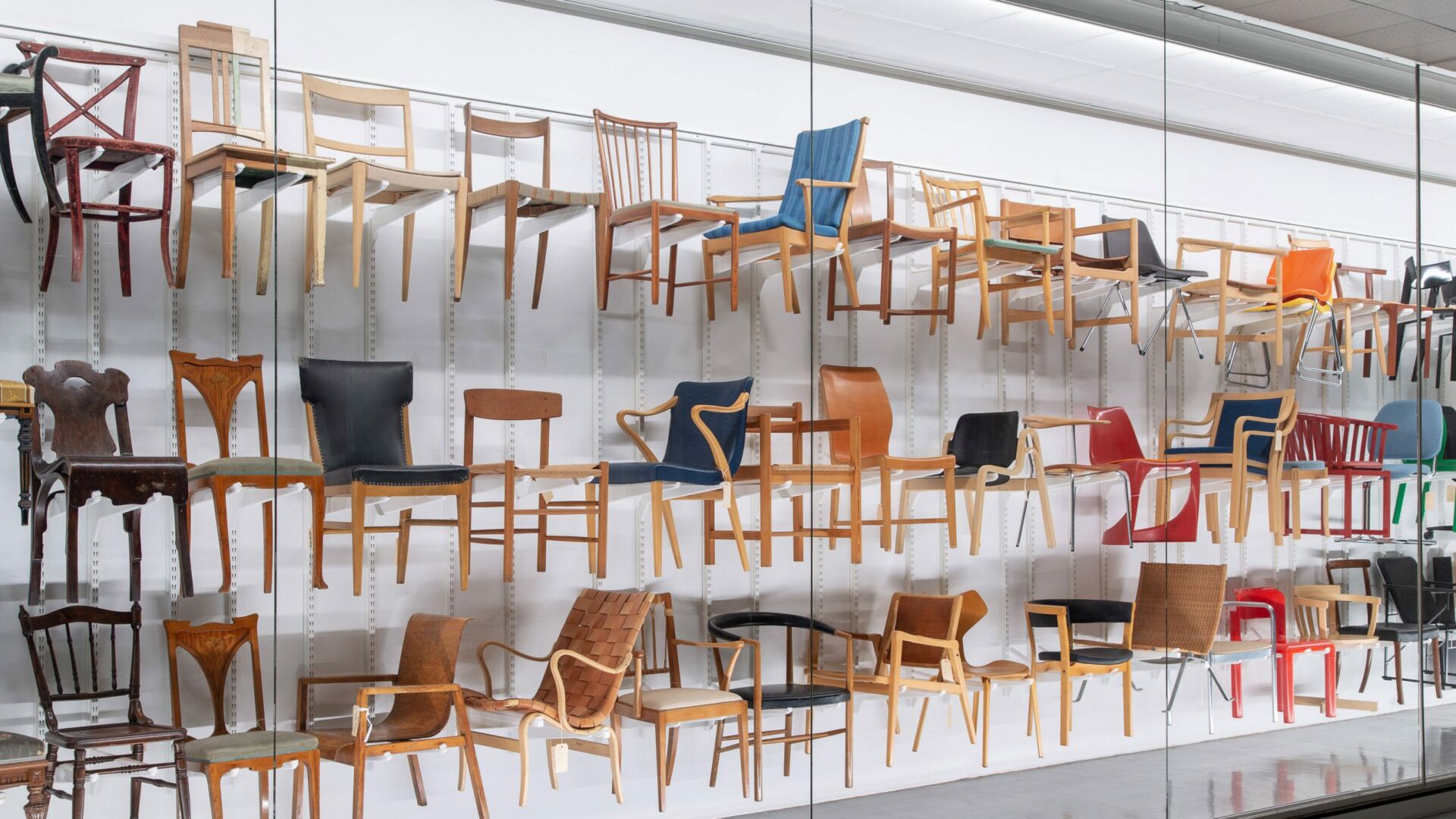 Since its founding, the Röhsska Museum of Design and Craft has been acquiring different chairs in order to illustrate the prevailing interior design trends and ideals from various historical eras. In the open storage repository in the museum’s auditorium, 144 of the museum’s chairs from the seventeenth century to the present are on display.

The chair has alternated between being a utilitarian object and a decorative piece, so there is a broad variation in the museum’s collection. Visitors will find everything from ergonomic chairs to chairs that are practically impossible to sit on.

A brief history of the chair

The seventeenth century brought a transition from chests and built-in benches to movable furniture, which caused chair manufacturing to take off. During the eighteenth and nineteenth centuries, different chair types were developed in a variety of artistic styles, and in the twentieth century functionalism broke through and became widespread. Ergonomic studies of sitting were conducted, which led to the development of more functional chair types. During the second half of the twentieth century, chair design came to be an area of experimentation for many designers – a chance to let their imagination and playfulness run wild.

Here are some of the chairs you’ll find on view in the museum: 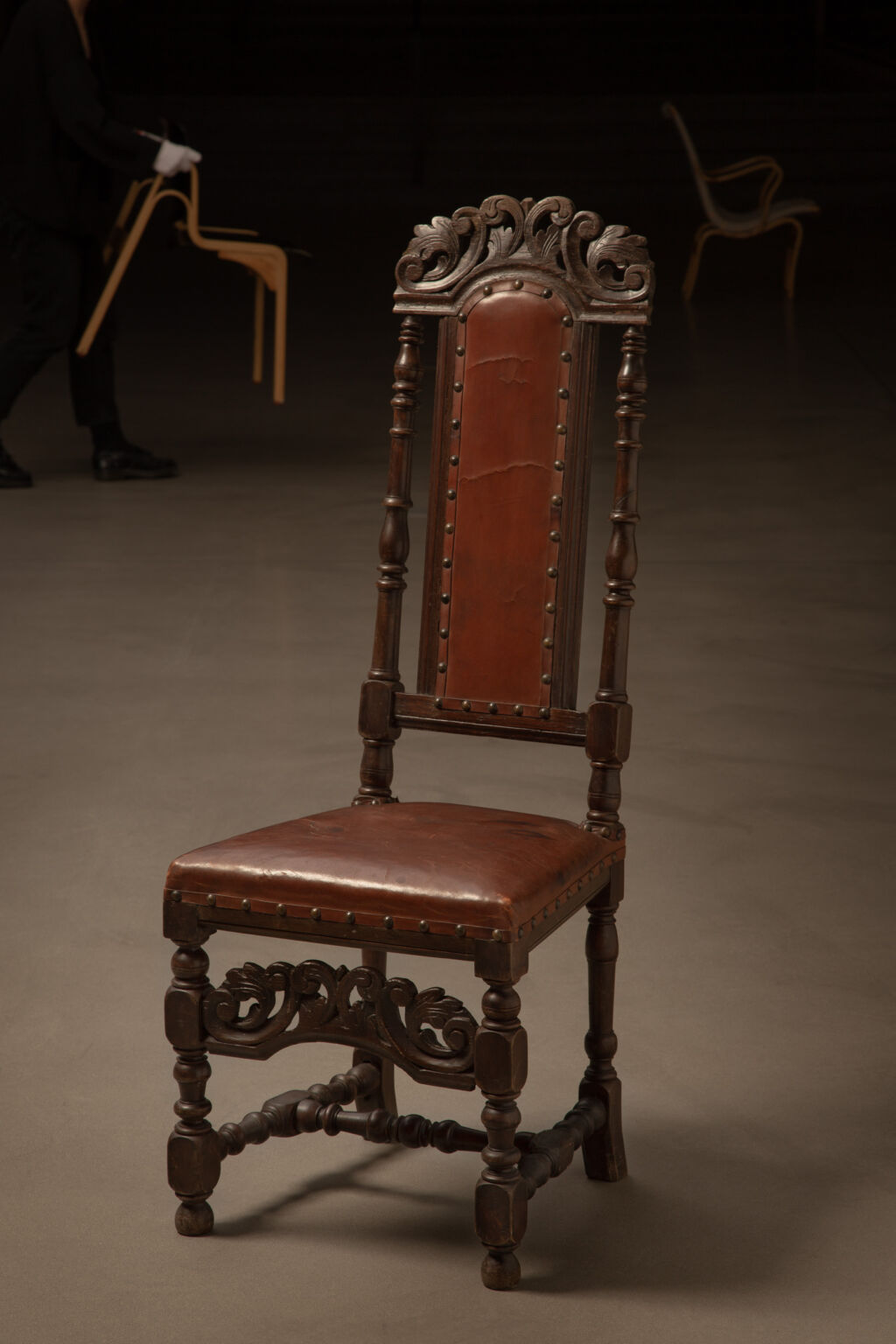 This elegant piece, made from dark-stained, sculpted birch with leather upholstery, was made in Sweden at the end of the seventeenth century.  At the time, design was being shaped by Dutch and French influences, with sculpted legs and high backs. Chairs often matched the rest of the interior in terms of colour. 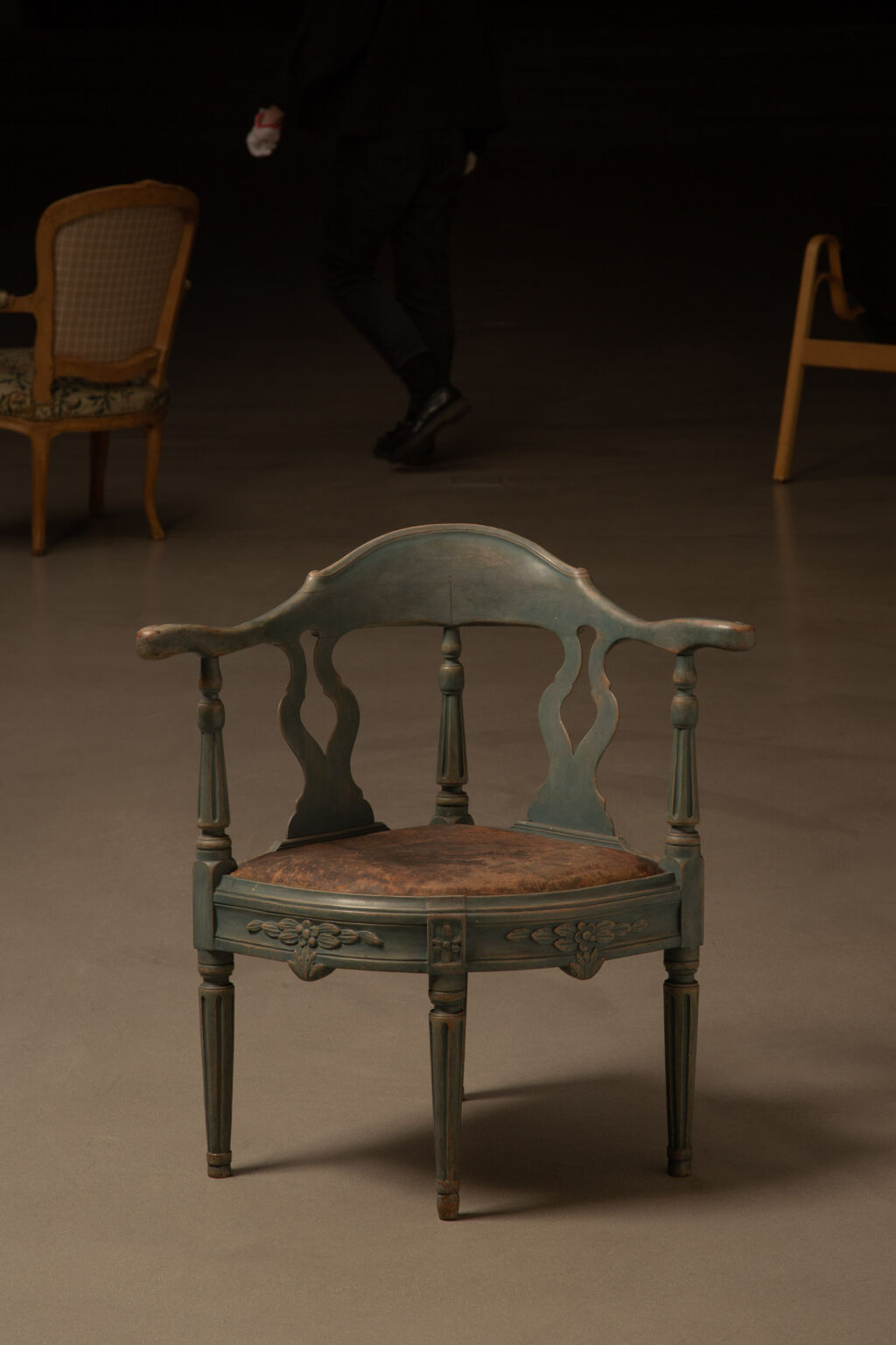 A corner chair, sometimes known as a powder chair, was used either for writing at a writing desk or when powdering one’s wig. This type of chair became popular during the eighteenth century, when wigs began to be powdered to achieve a milkier look. 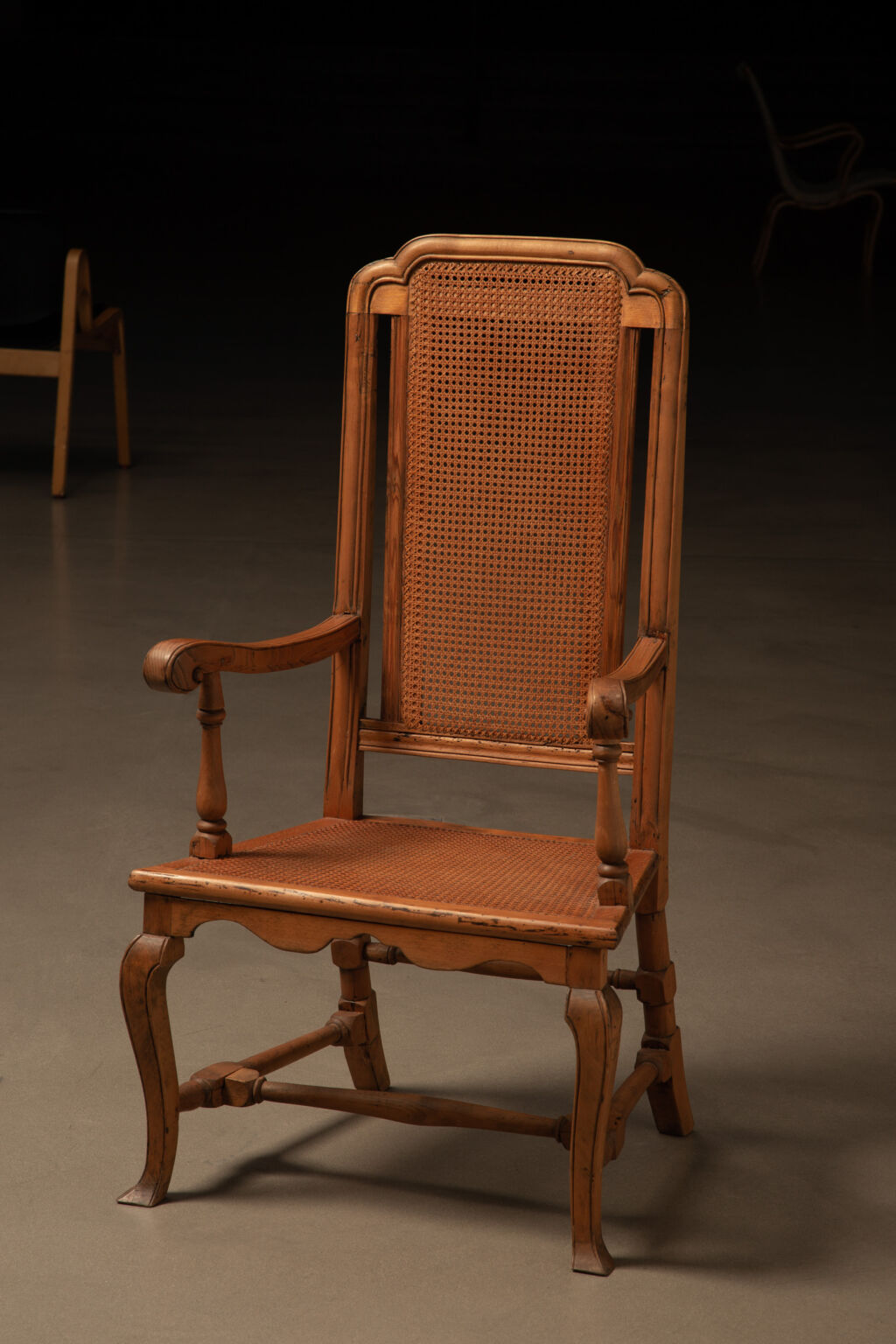 During the eighteenth century, Swedish chair design was shaped by foreign influences. The style had clear Chinese elements, and the chairs’ front legs were given a Rococo bend, often culminating in birds’ claws or lions’ paws. The domestically produced chairs in this style often show influences from the French Rococo. At the start of the eighteenth century, it became more common for chairs to have high backs and incorporate rattan imported from East Asia. 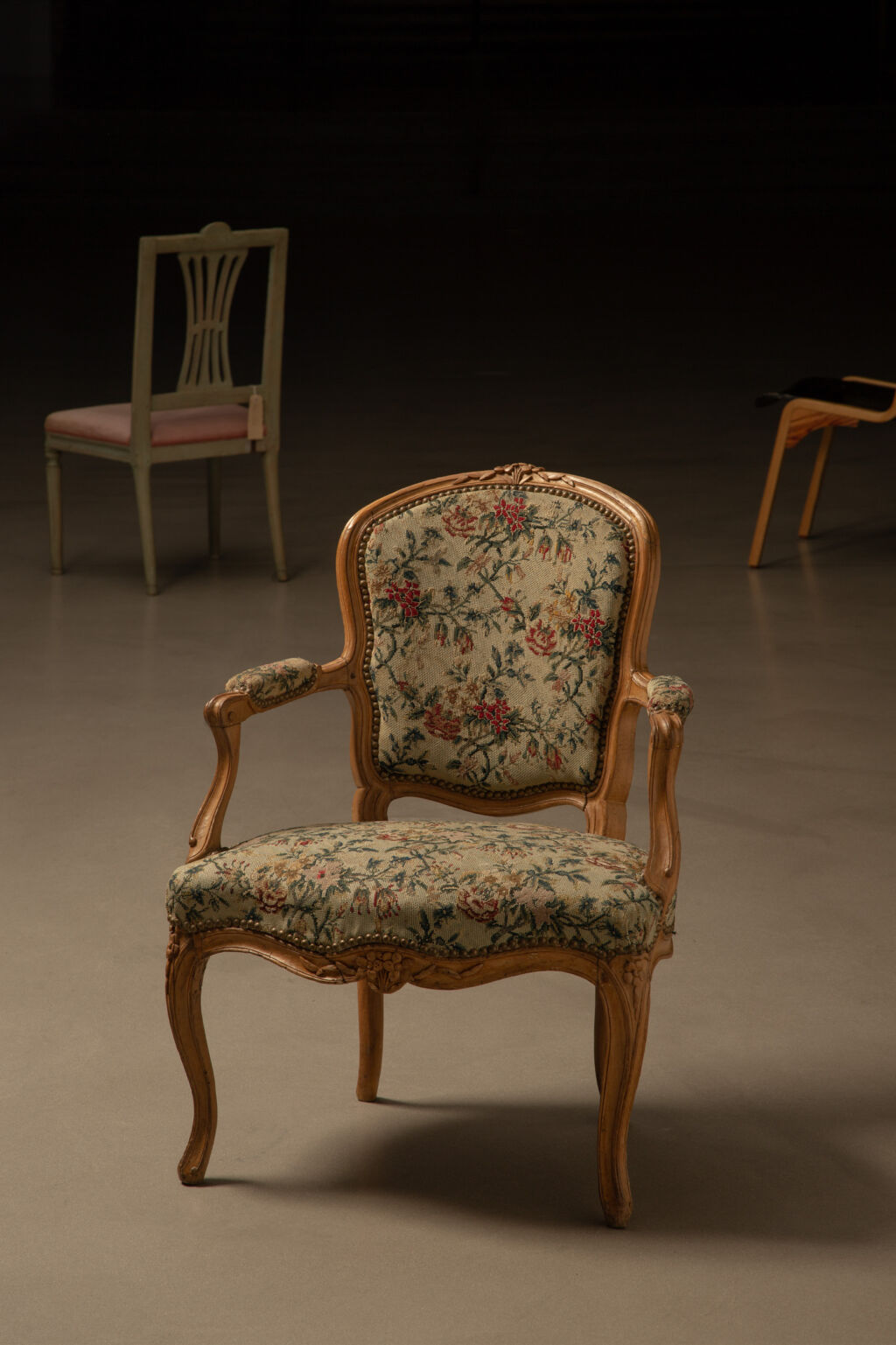 This squat lounge chair in carved and polished timber was crafted by the French furniture maker Jean Nadal. In the eighteenth century, French Rococo became fashionable in Sweden, and the upper class often imported furniture from France. At the same time, upholstered furniture, which was much more comfortable, was also becoming more common. 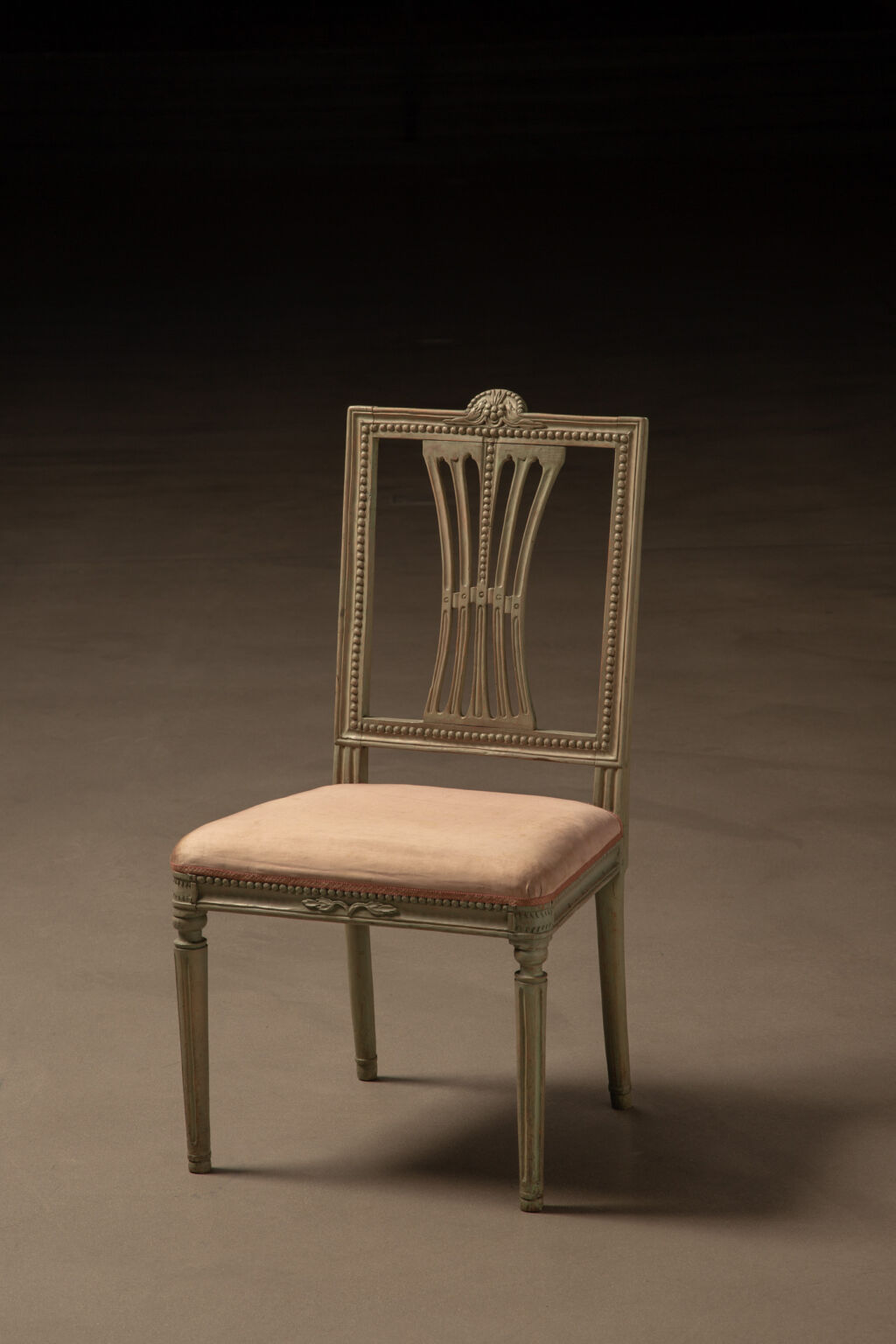 Gustavian style became fashionable in Sweden during the second half of the eighteenth century. It was a Swedish version of neoclassicism, with more restrained, symmetrical forms and motifs based on precedents from classical antiquity. Chair legs were straight and chamfered, and the timber was painted with marble-inspired colours in greys and other cool tones.

This birch chair was probably crafted by the chair maker Erik Larsson in Lindome around the year 1800. RKM 140-1916. 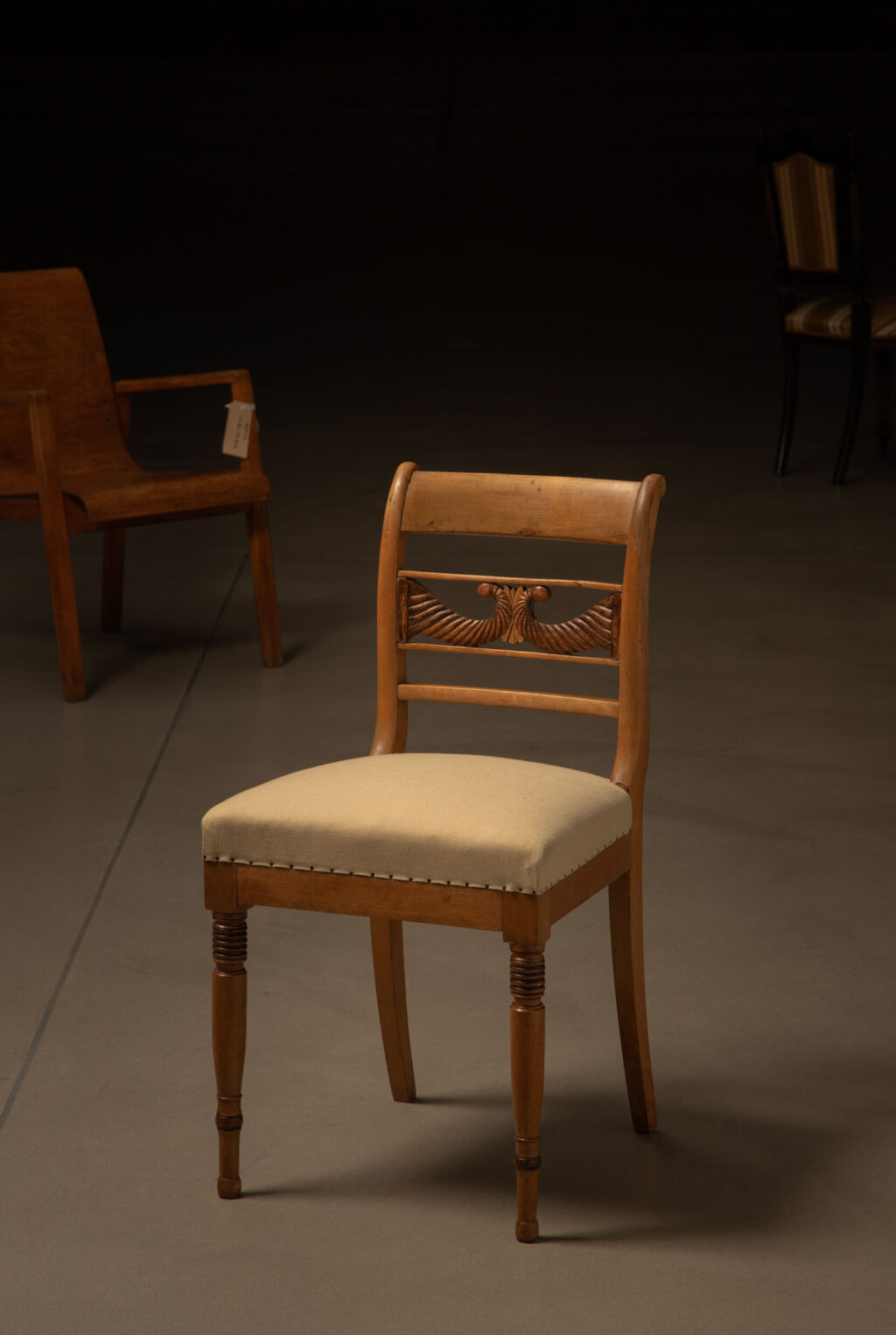 During the first half of the nineteenth century, Empire style (known here as Karl Johan style) became popular in Sweden. Along with its classical sources of inspiration, Empire furniture also included Egyptian elements. The back of this chair has Empire ornaments and was probably made by the chair maker Johannes Andersson in Lindome. 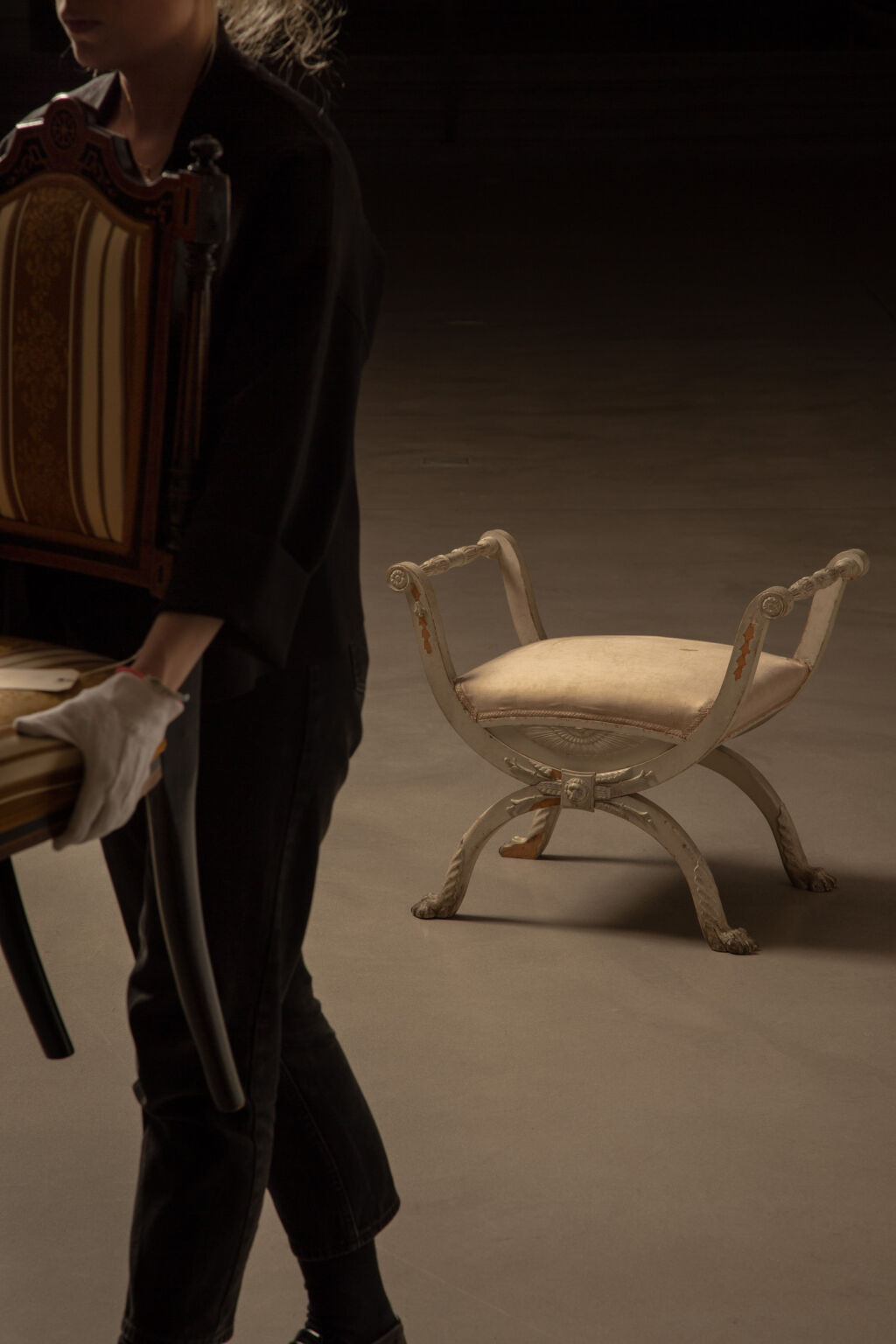 The tabouret became popular in the middle of the nineteenth century as a ceremonial piece and was introduced in Sweden after French precedents. A tabouret is a low stool with no back. Sometimes it is equipped with four legs and a stretcher or, as in this model, with crossing legs. The style is late-Gustavian, with inspiration from classical antiquity.

This tabouret from the early eighteenth century is made of sculpted timber with an upholstered seat. Made in Sweden by an unknown artisan. RKM 7-1916. 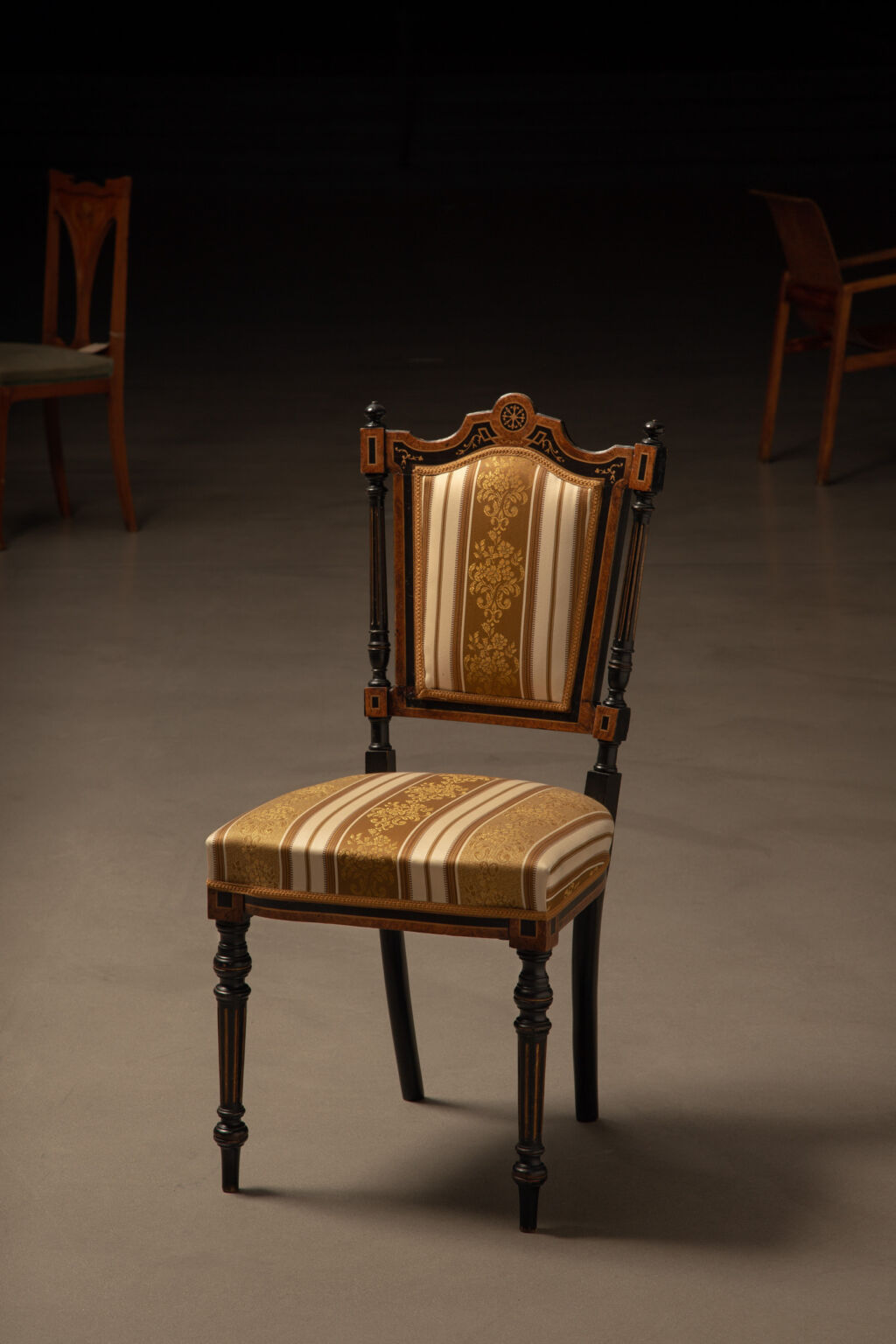 The distinctive characteristics of furniture made in the style known as Louis XVI (or Neo-Gustavian) are polished blackened pear wood, shield-shaped backs with sculpted crowns, and ornately turned legs. For the upholstery, silk fabrics in bold colours were favoured, often as here with perfectly smooth cushioning. 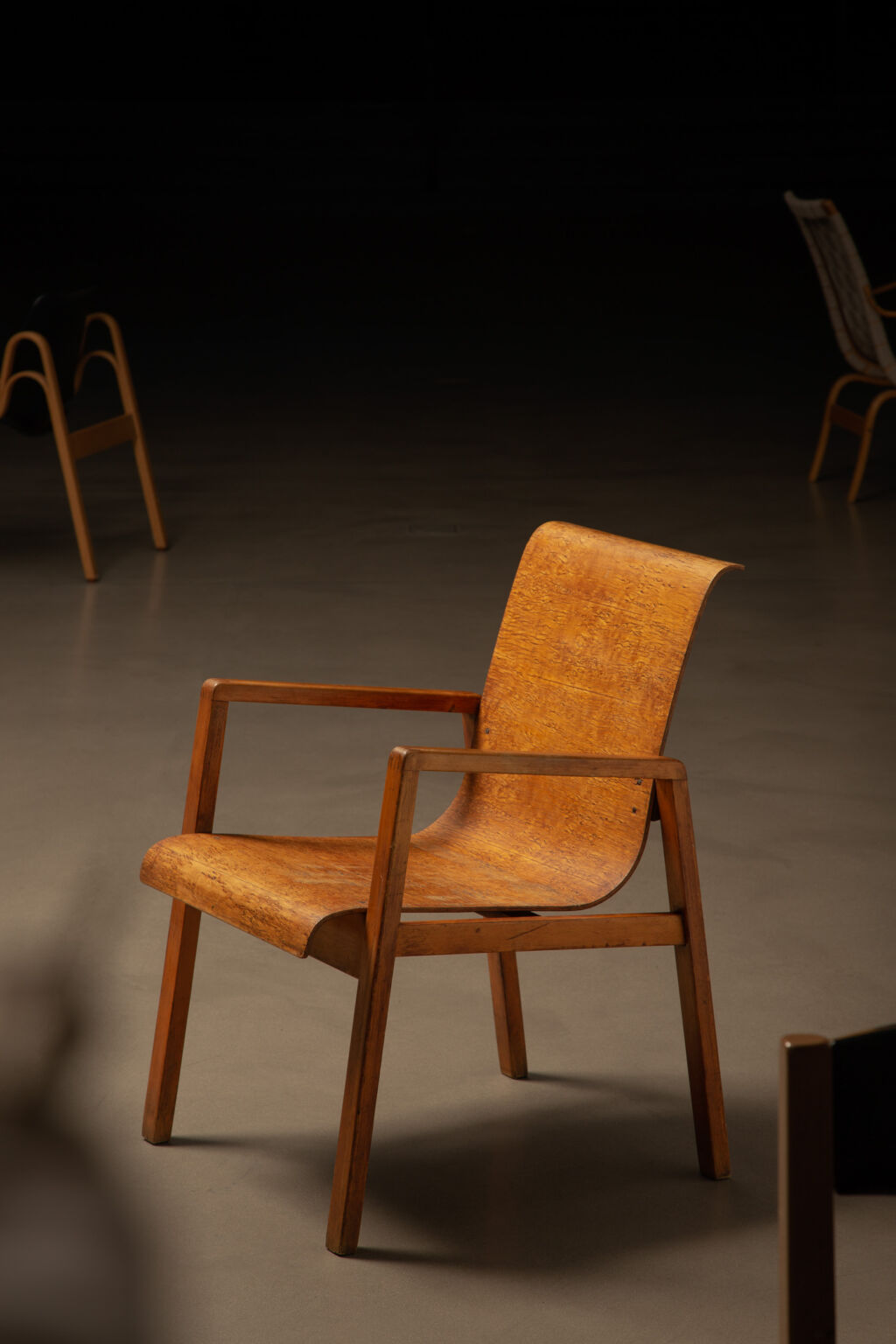 Chair 51 was designed by the Finnish architect Alvar Aalto in the 1930s. During this time, functionalism was the ideal in architecture and interior design. Functionalism was a radical style, a new design idiom in which furniture and objects were to be designed based on their function, with no unnecessary decoration or ornamentation. 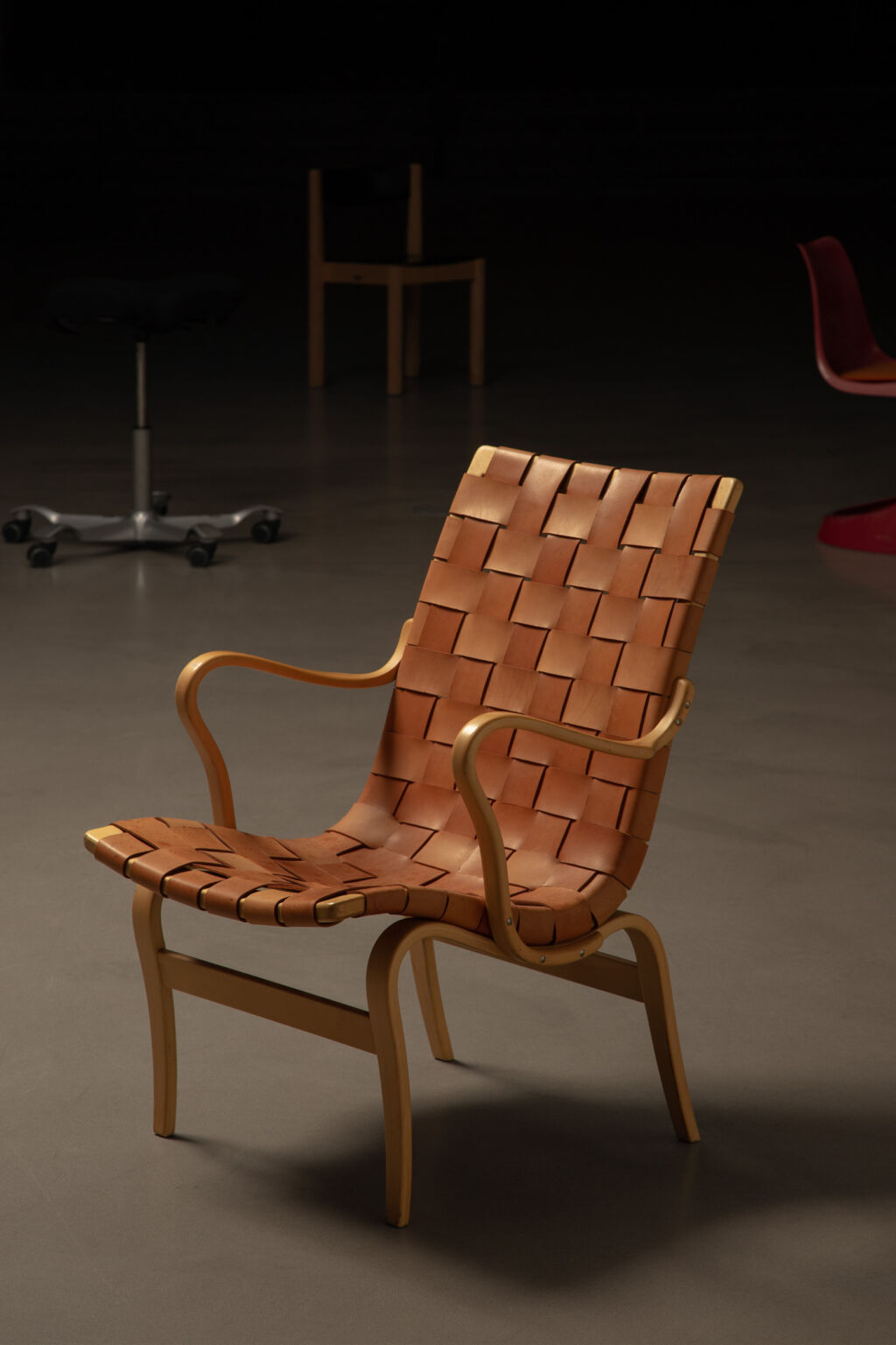 The collection includes many chairs and lounge chairs by the Swedish designer Bruno Mathsson. His Eva armchair is one of the most popular models, still in production almost eighty years after it was first introduced. It is made of pale bent laminated timber with woven oxhide straps. Mathsson was interested in functionalism and conducted ergonomic studies of sitting. 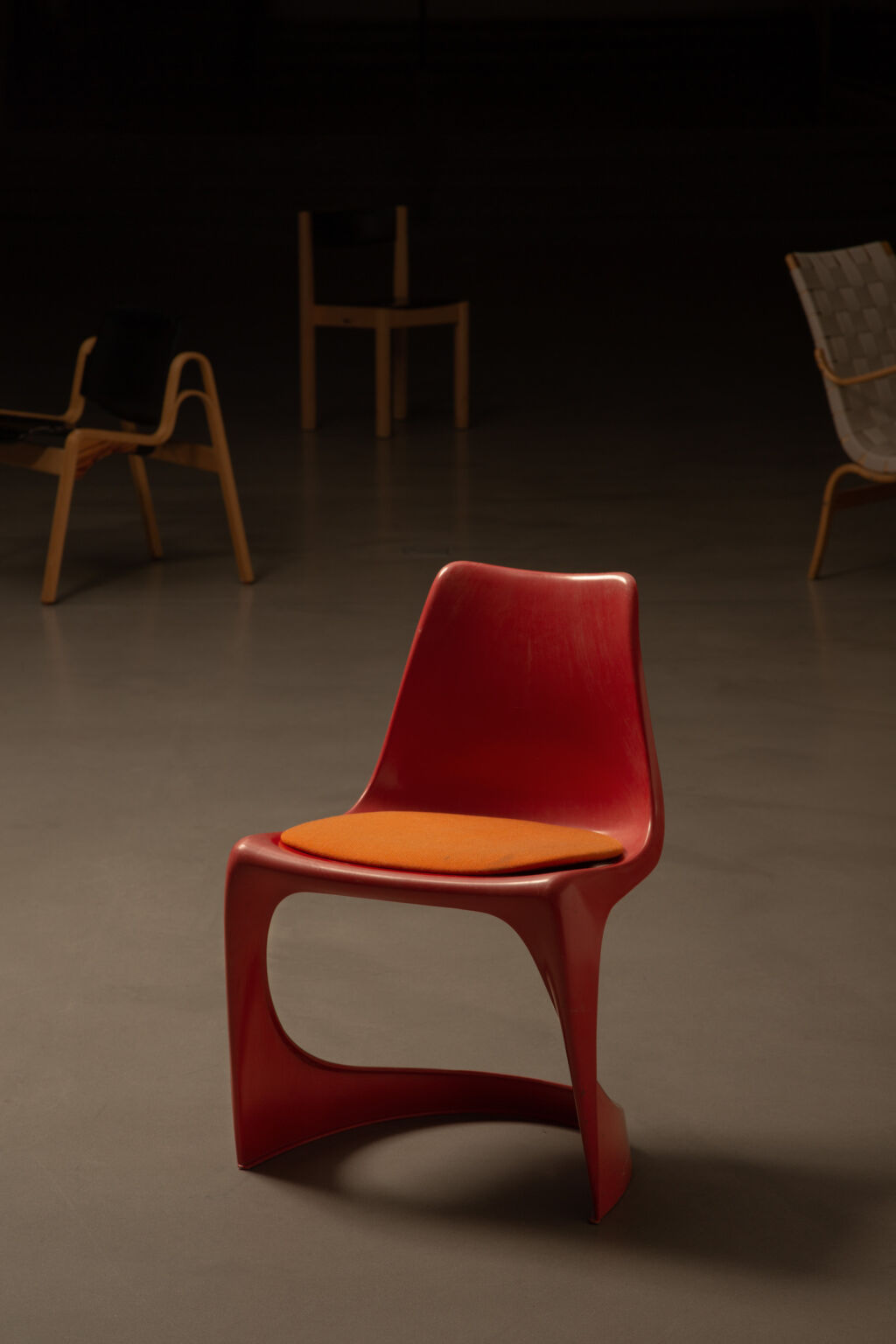 The 290 dining chair by the Danish designer Steen Østergaardvar was the first chair to be entirely injection moulded in plastic. It was made in 1966 by injecting fibreglass-reinforced nylon into a large form.

During the 1960s, plastic was a popular material. It first began to be used after the Second World War as oil became more widely available again. Plastics were initially made to imitate other materials and forms, but in the 1950s, designers began to more clearly exploit their unique design possibilities. Denmark, RKM 2-1997. 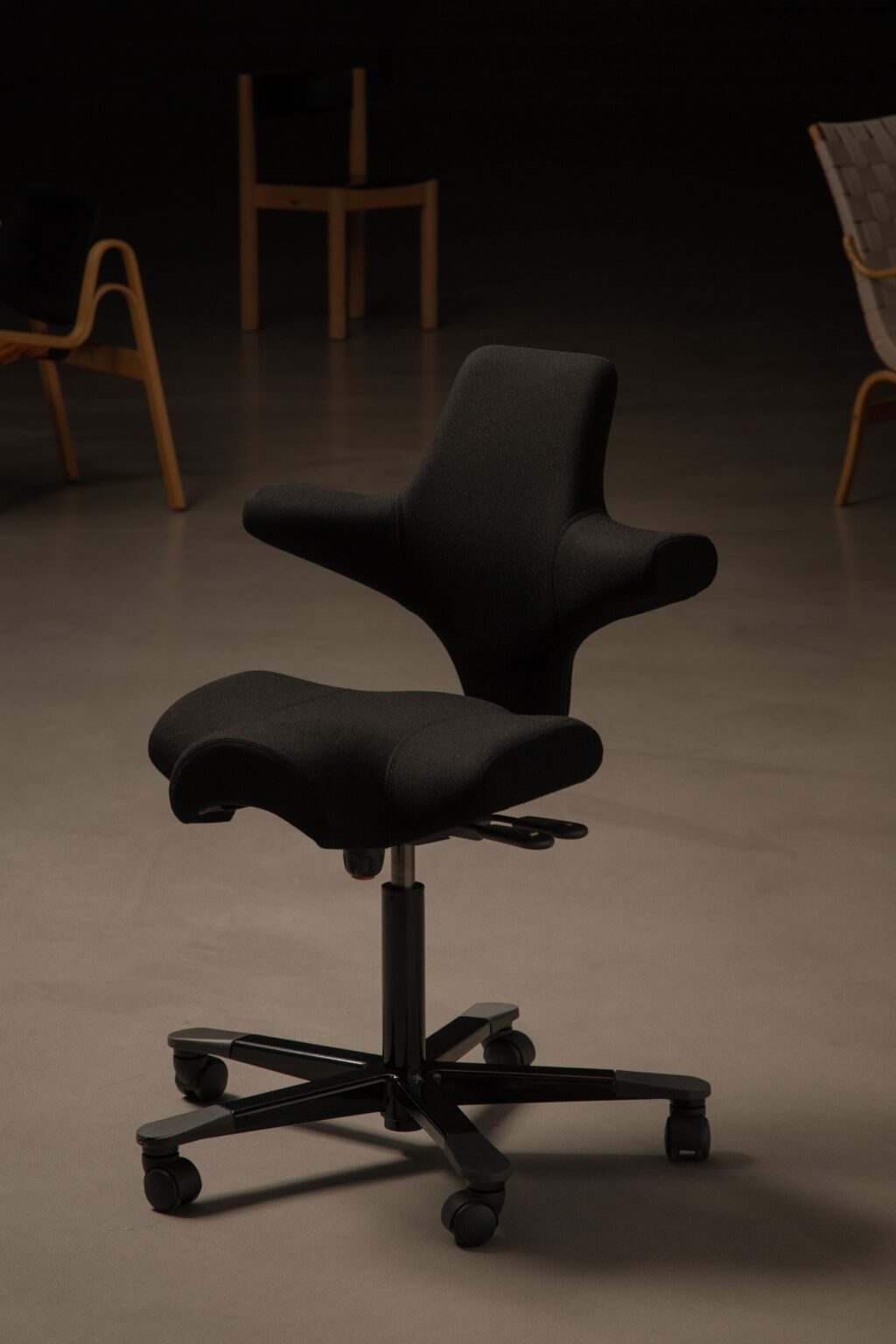 During the post-modern era of the 1980s, a growing number of furniture pieces were created as objects of art, with geometrical and asymmetrical forms becoming common. At the same time, the ergonomic and functionally designed office chair on wheels made its appearance.

The Capisco desk chair (1984) was designed by Peter Opsvik to allow the user to assume multiple different postures while working. The design was inspired by the form of a saddle and the erect posture of a horse rider. RKM 5–2001. 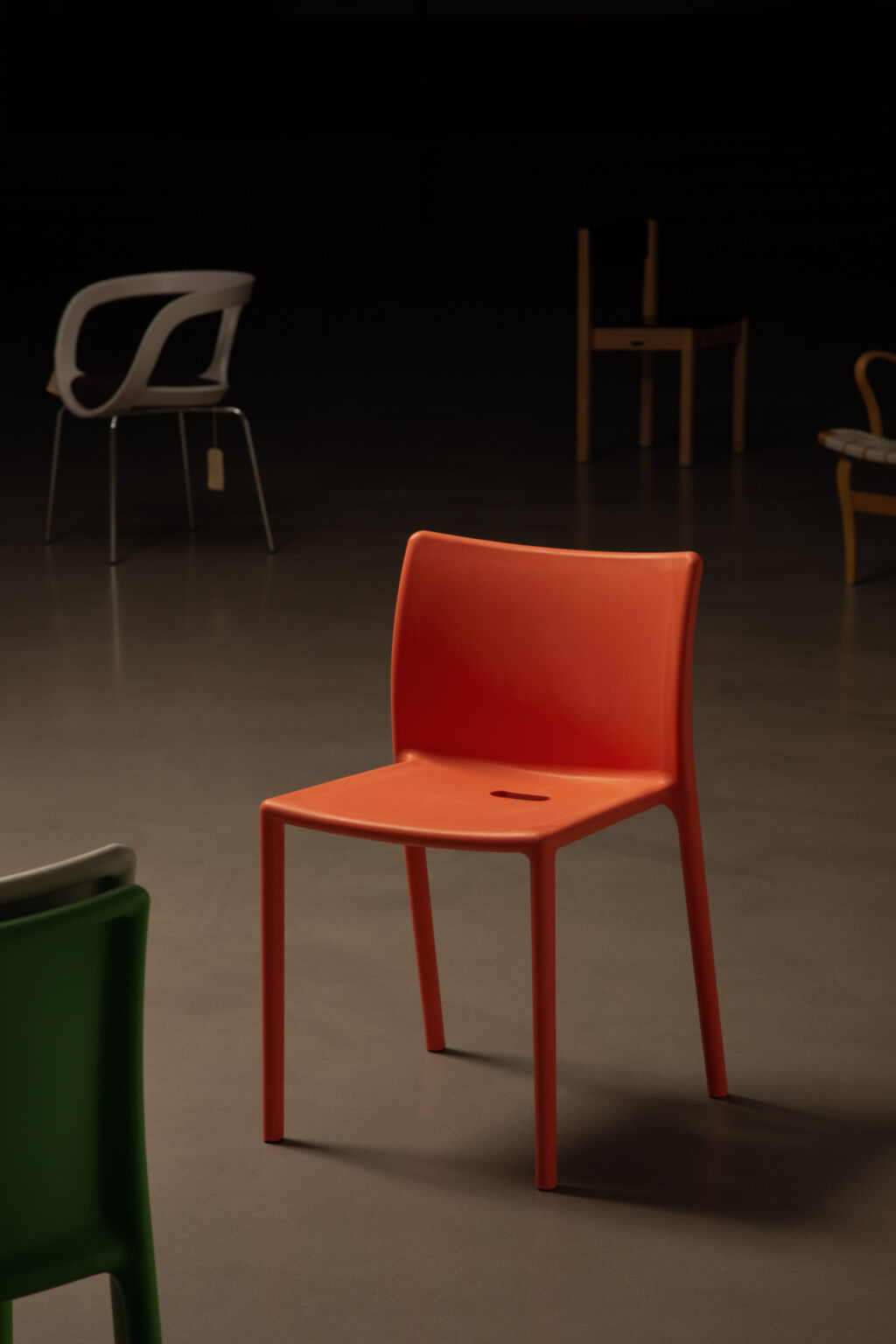 The Air-Chair was introduced in 1999 as a piece of furniture that could be used indoors or outdoors. The designer Jasper Morrison worked primarily with furniture in large series and was interested in the possibilities mass production offered through various manufacturing methods and materials. 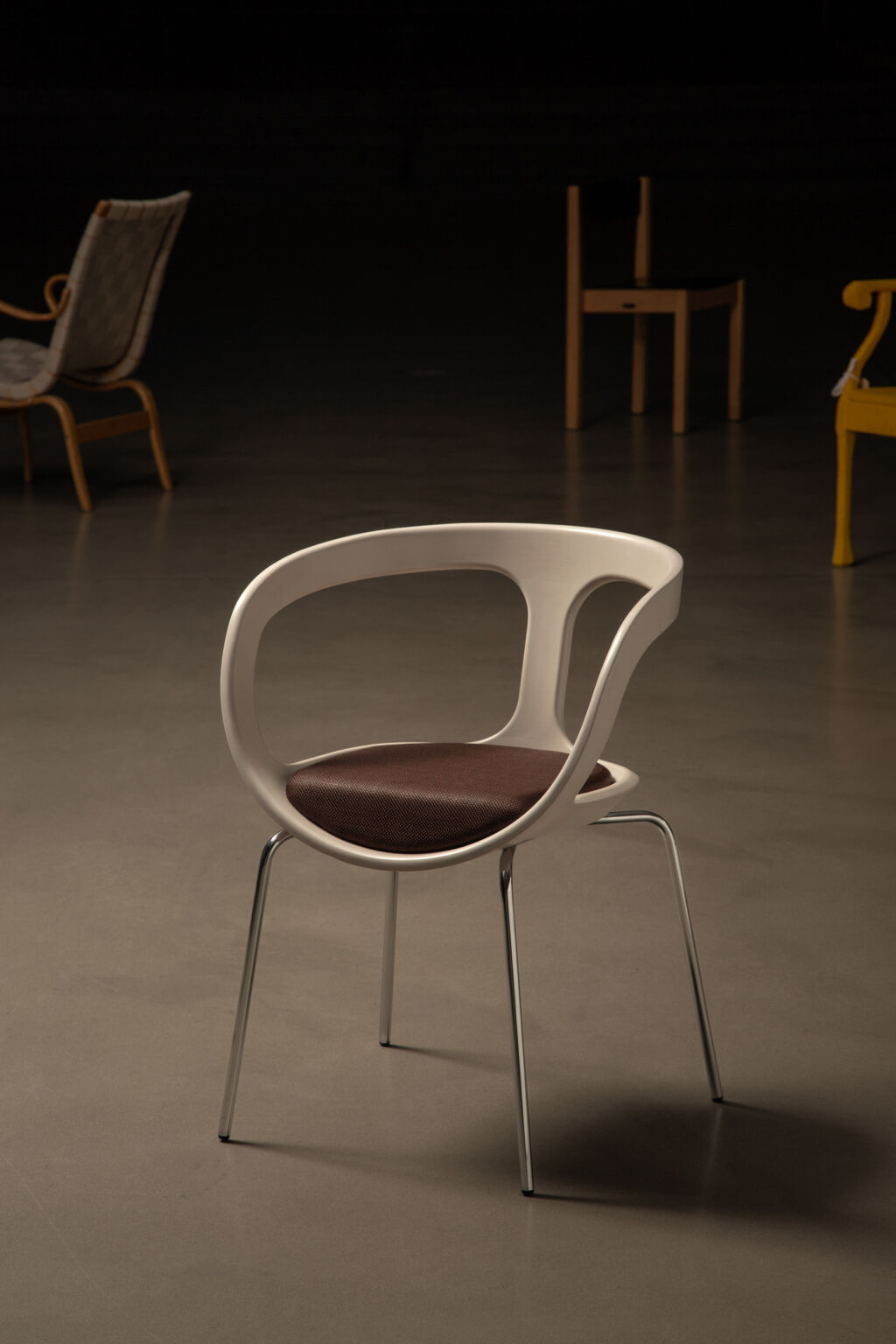 This Hug chair, designed by Anna von Schewen, is made of beech and steel with a seat cushion clad in kevlar fibre. The form is produced by a computer numerical control router and is a mixture of soft and hard shapes and materials. In 2002 it was honoured with the Excellent Swedish Design award, and it has even been pictured on stamps. 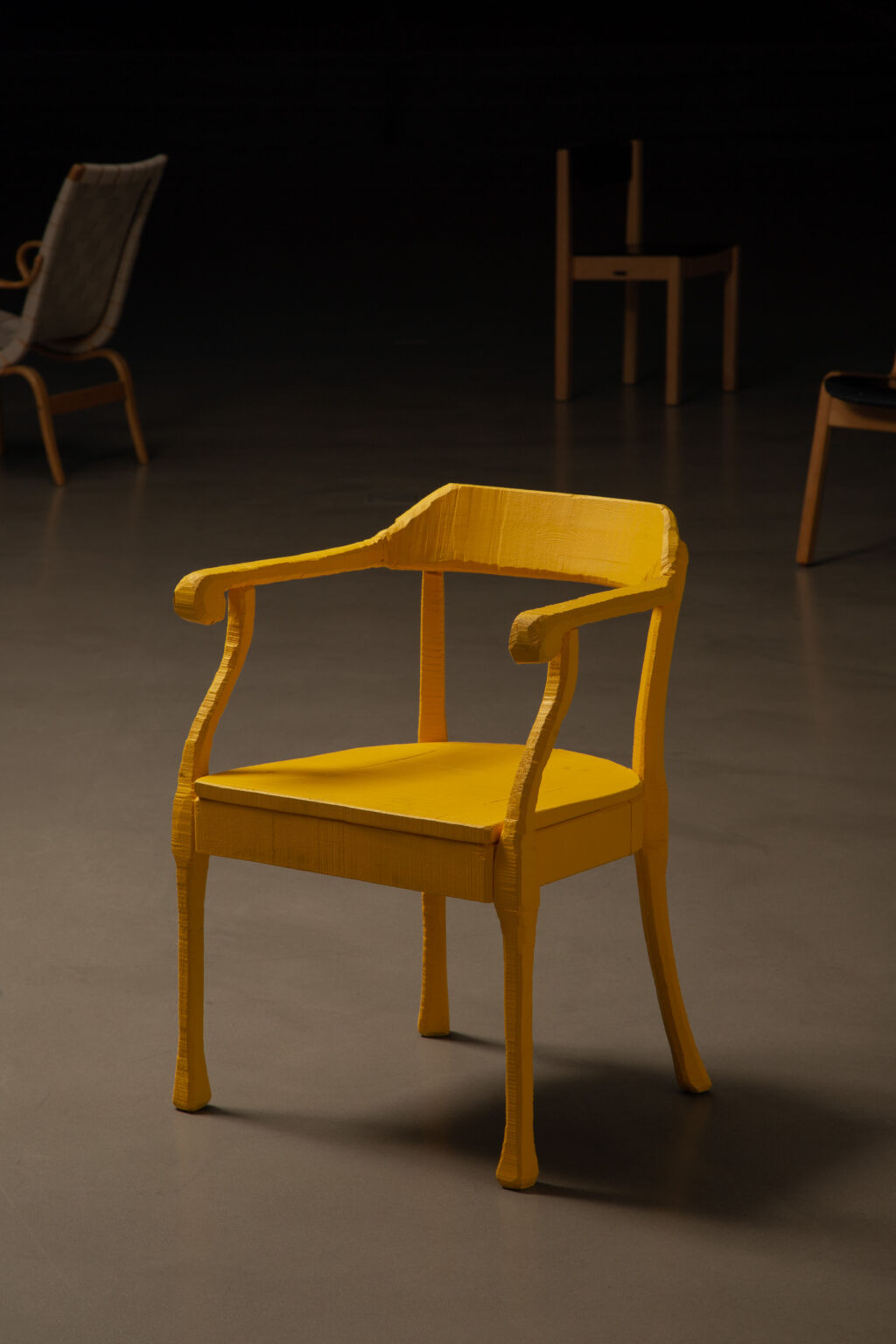 Although its form is traditional, this chair’s rugged surface and manufacturing process are experimental. Raw (2007) is made of sawn and hand-hewn pine. The chair’s designer, Jans Fager, often combines artistic forms with high-tech manufacturing and production.

In the first decade of the twenty-first century, organic and experimental forms became increasingly common, and there was a growing interest in the expressive power of handicraft. RKM 48–2008.