One hundred years with the Röhsska Museum

The Röhsska Museum opened in 1916 and is the only museum in Sweden specialising in design and craft. The museum has a unique collection comprising some 50 000 artefacts – from 4500-year-old Chinese archeological finds to contemporary Scandinavian design.

Sweden was relatively late to build a museum dedicated to applied art and design. A number of similar museums had already been built all across Europe to showcase the best in industrial production and craft creation. The first one was The Victoria and Albert Museum in London, opened in 1852, which was then followed by, among other, Taideteollisuusmuseo (Museum of Art and Design) in Helsinki from 1874, Kunstindustrimuseet in Oslo from 1876, and Kunstindustrimuseet (Design Museum) in Copenhagen from 1890.

The starting point for the construction of these museums of craft and design came shortly after the World’s Fair in London 1851. At the fair, the world’s industrial capacity was showcased, but criticism was also strong against what many saw as a lack of artistic quality. There was a concern that industrialisation would wipe out traditional arts and crafts.

The museums were established to collect good examples. The idea was that with the right role models, artisans, industrialists, and the public would develop their knowledge and sense of good taste. In this way, they hoped to raise the artistic level of industrial production. Museums were thus often called museums of Art and Industry. 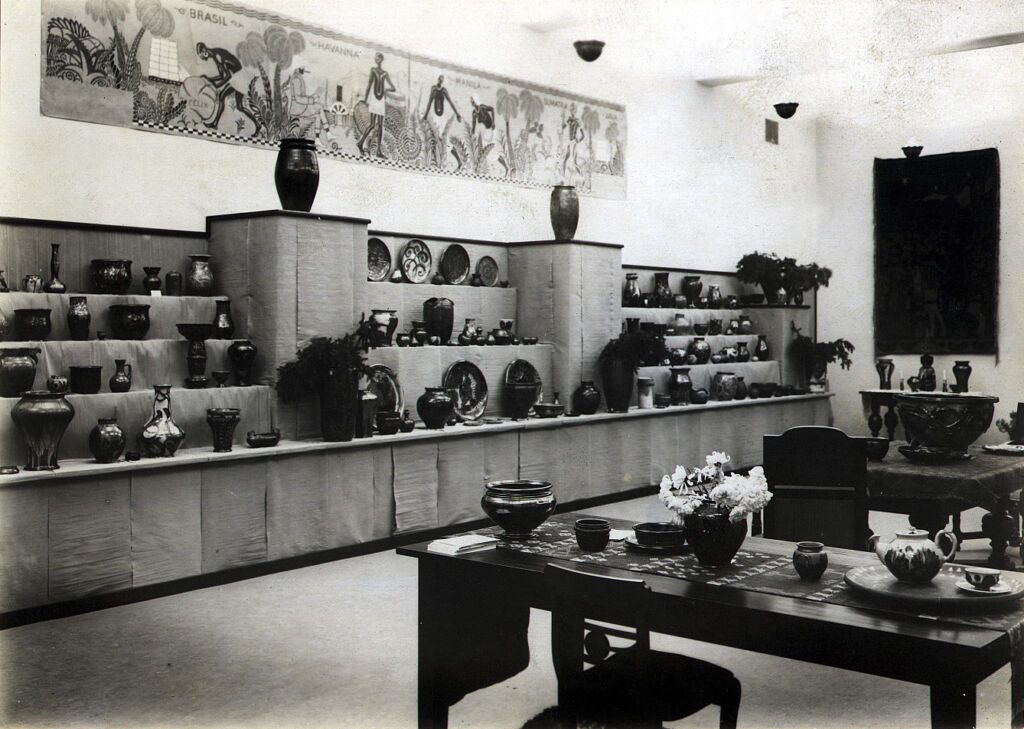 While the building was still being constructed exhibitions were held inside. The image shows the museum’s second exhibition, Kählers Keramik 1914. Photo: The Röhsska Museum.

The idea to open a museum of craft in Gothenburg was born during the 1880s, the art association Sällskapet Gnistan arranged its first exhibition with artefacts on loan from private collectors in Gothenburg. The enormous interest from visitors and collectors alike introduced the idea of a permanent museum in Gothenburg to support the applied arts.

The man behind the idea was accountant, author and amateur archeologist Wilhelm Berg (1839-1915) who was deeply involved in the cultural life of Gothenburg. He was, among other things, the contested secretary of Sällskapet Gnistan.

Once, in describing the style of the bourgeois homes in Gothenburg, Wilhelm Berg noted the absence of craft. Sure, there were beautiful inherited pieces of furniture and artworks, but the sensibility for well made everyday objects had been replaced by a penchant for extravagance and precious objects in gold and silver intermingled with mass-produced goods. “Lots of luxury. Little taste”, is how he summed up his impressions in a concise and controversial diagnosis of society.

Like many other museums of Art and Industry, the Röhsska Museum was founded with private donations. The two manufacturing brothers Wilhelm Röhss (1843-1900) and August Röhss (1836-1904) had created a fortune on timber exports and cotton imports. In their wills, they donated funds for the construction and furnishing of a museum building as well as funds for purchasing the museum’s future collections.

The foundation for the collection

Twelve years before the museum’s inauguration the hectic work of erecting the museum building and collecting artefacts for the collection began. The first collections consisted of older Swedish and European craft. Soon after, a collection of Japanese artefacts was added and in 1912-1913 the botanist Thorild Wulf embarked on a collecting trip to China on behalf of the museum.

Around the turn of the 20th century, there was European craze for Chinese and Japanese culture. Thorild Wulff was an experienced traveller and received a quick introduction to Asian craft while on a trip to Europe. He arrived in China the same year as the emperor abdicated and in the middle of the country’s political chaos, he managed to purchase a number of objects, many antiques, and even a few archeological finds. These artefacts were the starting point for the museum’s large Chinese collection that today is one of the oldest European museum collections.

In 1946 ICOM – International Council of Museums – was founded to help prevent trade in other countries’ and ethnic groups’ cultural objects. The museum abides by ICOM’s code of conduct and today mainly collects modern crafts and design plus older Swedish objects. 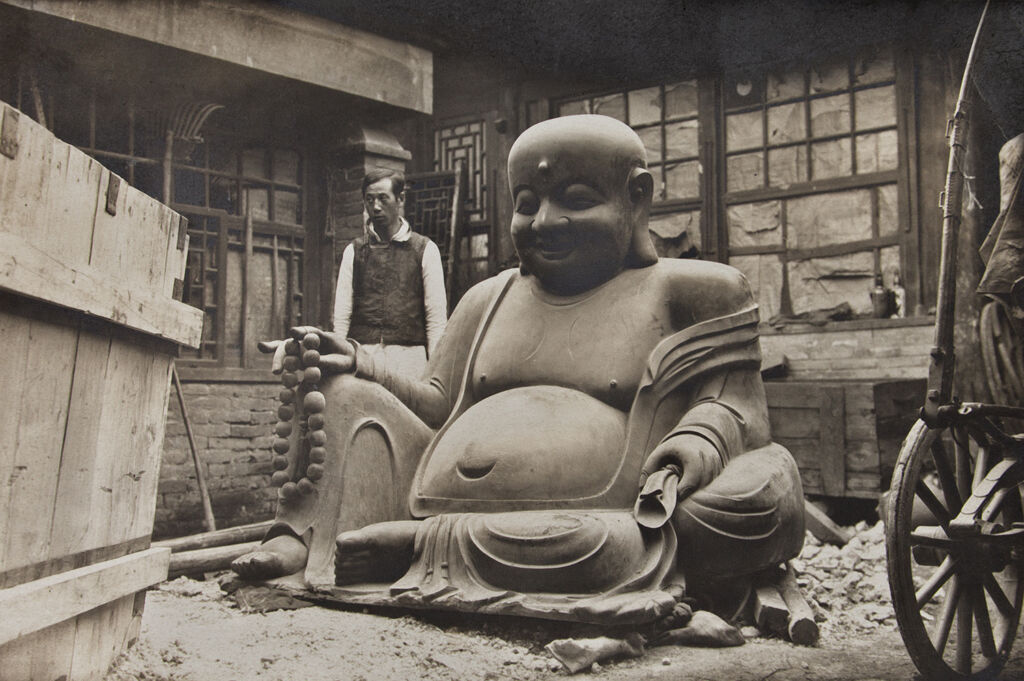 The laughing Buddha Budai that Wulff brought back to the Röhsska Museum from his collection expedition in China 1912-13. Photo: Thorild Wulff

For the public not the upper class

“A museum of art and industry is according to modern concepts an institution which should not – like the toothbrush – be considered enjoyment solely for the upper class.” That is how Axel Nilsson began his speech to the Röhsska Museum’s building committee after he had been asked to lead the construction of a new museum in Gothenburg.

Axel Nilsson had a colourful personality and was something of a renaissance man, active as a cultural historian, photographer, archeologist, engineer, architects and painter. His vision was to create a museum for professionals and the public to spread and inspire to better tastes and knowledge of craftsmanship of quality. The act of collecting is often associated with wealth and money but here the visitor’s experience of the exhibitions would be enriching.

Handmade bricks for the museum

The museum building was constructed from red hand-crafted bricks which would give life to the building’s exterior as well as recall medieval building traditions. The building was designed by Carl Westman (1866-1936) and placed in between Chalmers on Vasagatan, currently Valand Academy and Svenska Slöjdföreningen’s school (The Swedish Society of Crafts and Design) on Kristinelundsgatan, which currently houses The School of Design and Craft. The building’s architectural design is in many ways typical of the 1910’s national romanticism.

The architect Carl Westman and the Röhsska Museum’s first curator Axel Nilsson worked closely together during the construction of the museum and were constantly spurring one another to come up with innovative solutions. Many of the bricks in the building’s facade have a design carved into them, which were commissioned and sometimes created by Carl Westman.

The museum spreads its wings

The first building ended up being too small to house the museum’s activities and in the middle of the 1930s there was a small extension made to the building, which was very much made in the style of the times. Functionalism was, in the 1930s, all the rage and the extension was completed according to this style. Melchior Wernstedt designed it to house the temporary exhibitions, it was finished in 1937. In the 1950s there was a need for even more space. Sven Brolid designed this newer extension which was constructed between 1957-62.

Today, the Röhsska Museum’s mission is to collect and exhibit design- and craft traditions disparate expressions and to stimulate awareness and knowledge of historic and contemporary design and craft. The driving force in the museum’s initial construction was to educate and promote good taste but today the museum would rather discuss and create meaning in the history of design. Our ambition is to offer a free zone for contemplation and conversation.

One hundred years of museum directors

The museum’s first curator was Axel Nilsson, who took part in the construction of the museum. His successors are Gustaf Munthe 1924, Göran Axel-Nilsson 1946, Jan Brunius 1972, Christian Axel-Nilsson 1986, Helena Dahlbäck Lutteman 1996, Lasse Brunnström 1998, Elsebeth Welander-Berggren 2000, Ted Hesselbom 2007 and Tom Hedqvist 2013. The current director is Nina Due who started in 2017.